be someone not something

“How many cares one loses when one decides not to be something but to be someone.” – Coco Chanel I love this quote.  Love it not only because of what it says … but because in my own ignorance … I had perceptions about CoCo Chanel.

I imagined someone like CoCo Chanel would be all about shallowness and glamour.

But she was a savvy businesswoman.

And she understood  branding <before there was such a thing called branding>.

And she had a sense of style about herself we could all learn from.

And, finally, she understood responsibility of fame.

She was more someone … not just something.

I probably put her in the same category as Shirley Temple Black <she became one of the first prominent women to speak openly about breast cancer and was a Representative to the General Assembly of the United Nations> and Audrey Hepburn <UNICEF and her dedication to helping impoverished children in the poorest nations>.

These were women who were famous for glamour or entertainment and used it, and their smarts, to be something … rather than someone.

We could all take this lesson to heart.

How Good is Albert Pujols

With the onset of spring training, I wanted to point out something really special happening in baseball right now. There is this guy by the name of Albert Pujols who you may want to take a look at if you have the chance.

Albert won his third MVP last season (this one by a unanimous vote). This guy, while he has a really good glove, is a big time hitter. An all round hitter. Think maybe Ted Williams type hitter (who hit over .400 and hit over 30 home runs).

Sometimes Albert gets lost among all the other media hyperbole. But this guy is gonna end up in the Hall Of Fame (and would have in any generation). He is only 29. Only two players, Barry Bonds and Stan Musial, had captured three MVPs before turning 30.

It began at age 21 when Pujols had one of the best rookie seasons in sports history (.329 with 37 homers and 130 RBI). Since then, he’s been the same player every year. He hits .330, slugs .600, gets on base at least 40 percent of the time, hits between 30 and 50 homers, never makes a mistake on the bases and plays near-flawless defense. Every single year. Nine years in a row.

A big number? Pujols ranks fifth on the career OPS (on base plus slugging percentage) list.

The players ahead of him? Babe Ruth, Ted Williams, Lou Gehrig, and Barry Bonds. (There are some names for ya.)

Derek Jeter is a great hitter. Maybe one of the best clutch hitters of all time (but he doesn’t have a particularly pretty swing). I always thought John Olerud had one of the prettiest swings I had ever seen. Effortlessly making contact almost every time. He was the master of the beautiful double. Tony Gwynn (and I would put Ichiro beside him) were hitting machines. These guys just made contact all the frickin time. Singles machines. Reggie Jackson had a beautiful big swing stroke. Wasn’t a big singles hitter, but he wasn’t paid to hit singles. Think of Albert as a combo of all of them; as the ultimate hitting machine.

Albert has almost won a Triple Crown three times. In looking at players’ careers before age 30, he compares to Jimmie Foxx, Hank Aaron and Hank Greenberg. Only Lou Gehrig maybe put up better numbers (but it is pretty close). Albert has a higher batting average, .334 to .320, and more home runs, 366 to 342, than Hank Aaron at this stage. Lou Gehrig had a higher batting average, .343 to Albert’s .334, and slightly more RBIs, but Albert has more home runs. The comparisons are jaw dropping.

Finally. Ok, there is something for Albert to aim for: Someone who we sometimes tend to forget about as a great hitter (not just home runs). Let’s compare him to Babe’s first 13 years as a fulltime outfielder:

Seriously. No one really compares to the Babe but at least Albert is in the same stratosphere. And how many players can say that?

So. You may want to make some time to watch him sometime. 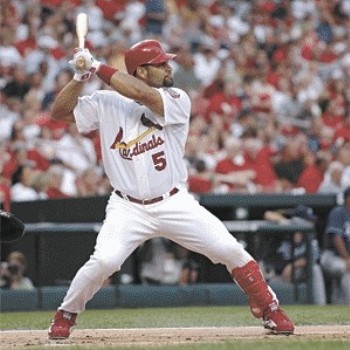 First. He is a load at the plate. He is a big guy who takes up some space in the box.

Second. He is a rock in his stance. No tricks or bells & whistles. Classic solid stance with no twitching and crap. No wasted effort.

Third. He hits the ball. A lot. And solidly. Compact beautiful stroke.

Fourth. No cheap hits. Oh. I am sure he gets his share of flares but this guy gets the barrel of the bat on the ball.

He is worth the price of a ticket to see him once. All hail Albert.